Migration and Refugees as a Legal Topic Migration and Refugees as a Legal Topic

We are bringing you an interview with Věra Honusková about the conference “The Future of Europe as a Place of Refuge” and workshop on “How to Teach Refugee Law”.

The conference entitled “The Future of Europe as a Place of Refuge”, which took place at the Faculty of Law of Charles University on 5-6 December, brought together more than sixty participants from many different countries to discuss the legal and ethical issues related to today’s challenges in the field of migration. The conference was supported by the European Society of International Law, as well as the UNHCR and the Odysseus Network. It was followed by a workshop on “How to Teach Refugee Law”.

How would you describe the conference?

It was a success. And a lot of work. The idea of organising the conference first emerged a year and a half ago and the preparations started in January 2019. Our aim was to organise an international conference that would serve as an inspiration for the faculty and its projects in this field and bring together experts on migration. We also wanted to show to participants from abroad that Prague has much to offer to them in terms of their professional development. Another important aim was to give our younger colleagues a chance to present their contributions. Conferences across Europe are often attended by colleagues from the Odysseus Network and representatives of European and international organisations, but not so much by the younger generation. We really benefited from becoming an ESIL-sponsored event as this was proof, for those thinking about attending the conference, of its high quality and, as a result, we welcomed academics from many different countries (ESIL stands for the European Society of International Law). My colleague in the department, Associate Professor Bílková, who is also the general secretary of ESIL, helped us significantly with the preparation and promotion of the event.

It was thanks to our collaboration with ESIL that the call for papers published on the website of the conference reached more people all around the world. We received forty abstracts from which the scientific committee of the conference selected sixteen contributions. I am really glad that this allowed us to welcome many young minds with new perspectives on refugee issues. At the same time, doyens in the field who have been studying this topic for decades also took part in the conference, so they could provide feedback in the discussions. In my opinion, this was very interesting and valuable for everyone.

The speakers included more than 30 guests from abroad, as well as many experts from the Czech Republic, mostly fellow academics, and also colleagues from the Ministry of the Interior, embassies, and NGOs. Among the Czech experts who took an active part in the conference, we can mention Professor Šturma, head of the Department of Public International Law and also the Chair of the UN International Law Commission. Our students came to the conference as well, so I am looking forward to discussing their research activities and diploma theses with them in the upcoming months. 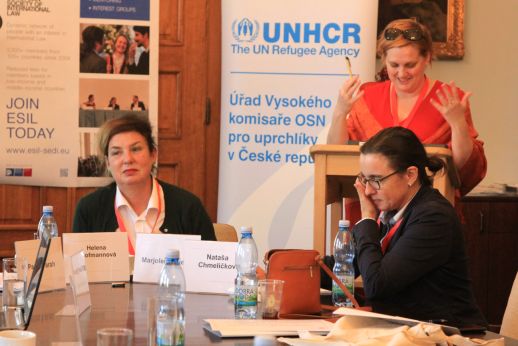 Is migration a relevant topic in law? In the media, it is usually presented from the view of economists, sociologists, or defence.

It depends on which branch of law we are considering. On the one hand, there has been no change in the number of treaties executed in the field of international refugee law, but some new non-binding documents have been drafted and it is a widely discussed political issue. On the other hand, European law is very dynamic and European legislation has been changing in recent years in response to the migration/refugee crisis of 2015 and 2016. Negotiations on the reform of the existing asylum system are taking place, which was also the topic of one of the contributions on the second day of the conference. In our country, it is a much discussed issue on the national level and we have seen a number of amendments to our legislation, although they are not always conceptual. We would see much more significant changes if the EU came to an agreement on the reform. But this has not yet been the case.

Generally speaking, migration and refugees are a very interesting topic from the legal perspective. One of the reasons is that it combines human rights and security, or even the sovereignty of states. This raises many important questions and issues, and possibly even conflicts between these areas. Also, migration as a legal topic reflects an immense number of political and personal questions.

Yes, it is a very attractive topic for our students. That is why we have a specialised module (Migration Law) that allows our students to acquire a thorough understanding of the topic, as well as practical skills and experience. In addition to theoretical subjects, we offer various professional trainings and simulations. We have been organising moot courts for nearly a decade and next year, we will celebrate the 20th anniversary of our refugee legal clinic. Students who attend these courses are highly motivated, so they actively participate in the lessons. I find it interesting that their motivation has changed over time. Two years ago, more students started attending our courses because they had heard or read about refugees and migration in the media and they were interested in how the law deals with these issues, in the “legal facts”. That was not the case in the past. We also get more students who want to specialise in migration law in their future career, which is their motivation for taking the courses.

The conference was followed by a workshop. What was its main topic?

We organised the workshop right after the conference because many participants of the conference are also teachers of refugee law at their respective faculties and we wanted to share with them our experience with different teaching methods. Since we have a specialised module in Prague, we were able to create a pretty unique set of various methods, and our colleagues were interested in what worked for us, and what we have learnt over the nearly twenty years of experience with teaching refugee law. We discussed the benefits of our methodology and the various forms of instruction that bring the desired results. Many participants were interested in the method of legal clinics since many of them are already familiar with this approach. The timing of the workshop was convenient in that we could also talk about “teaching corners” that have been recently set up in professional organisations. These are virtual platforms where teachers share their materials for students. For example, such a project was also recently launched by the afore-mentioned European Society of International Law, and our colleagues involved in it were thrilled by our workshop. 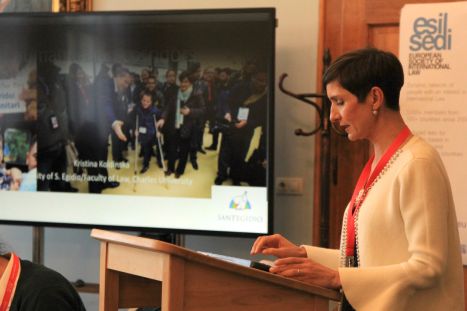 What are the plans for the future?

Plans… Well, first of all, I really appreciate that the faculty and sponsors support such events (and I want to especially thank our Dean for his support). We are also very thankful for the support of professional organisations, not only the European Society of International Law, but also the Odysseus Network and the National Office of the United Nations High Commissioner for Refugees in Prague with which we have been collaborating for a very long time. An ESIL representative also attended the conference, checking whether we meet the expectations of this organisation. I am really glad that we did. Everyone who took part in organising the conference did a really good job. After all, many of the organisers have completed our Migration Law module and they now take part in similar events as volunteers.

Having a network of volunteers and supporters enables us to plan similar events in the future. We will definitely organise another workshop on teaching methods, this time with a more specific focus and hopefully again in collaboration with our colleagues from ESIL. We will see whether next year, or later. Regarding the conference, this depends on project needs and we will probably get back to this topic in one of the parts of the 2021 conference, but this is yet to be planned. I want to organise a workshop with colleagues from abroad on one of the topics in the project but this will be a smaller event, for ten to fifteen people. In the next few months, we will focus on publications as we need to get more feedback on the topics studied.