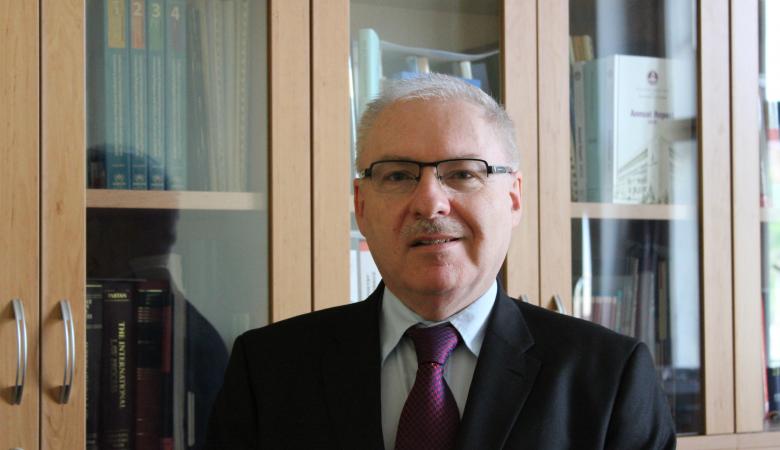 When did you first become interested in international law?

What did public international law courses at the faculty involve in the 1980s? Did you discuss only the Socialist Bloc?

What does the office of the Chair of UN International Law Commission involve?

The Chair is one of the 34 members of the UN International Law Commission, meaning that he or she does not have any more powers than the remaining members. All members of the Commission, including the Chair, contribute to the activities of the Commission, consisting in the development of international law and its codification. Our task is to express opinions on the issues discussed, on draft articles, and other results of the work of the Commission. However, the Chair does have some extra responsibilities, in particular presiding over the plenary sessions, but we also do a lot of work outside the morning plenary session. The Drafting Committee that prepares the specific wording of the draft articles has its own meetings and Chair. The Commission also has two Vice-Chairs who have other duties. The Chair and other members of the Bureau prepare the agenda of the session. The Chair also fulfils a representative function on certain occasions or during official visits of representatives of other bodies concerned with legal affairs. Each year in autumn, the Chair presents the Commission’s Annual Report at the General Assembly of the UN. The results of the spring and summer sessions of the Commission in Geneva are then discussed at the turn of October and November in New York. The Chair gives the introduction to the individual chapters of the report, which are then discussed with the representatives of individual states.

Where do your colleagues come from? And how difficult is it for a person from the Czech Republic to be elected to such a prestigious office?

The basic precondition is to be a member of the International Law Commission. It consists of 34 members from all over the world, elected by the General Assembly for a five-year term of office, with seats being allocated always among regional groups. There are five regional groups of UN member states. The Czech Republic is in the Eastern European Group, which currently has four seats in the Commission. Other regional groups have a few more members.

Given the number of the seats in the Commission, it is not possible for all UN member states to have their representative in the Commission, so you first need to become a member of the Commission. Candidates are nominated by their respective countries but then they act as independent experts in the Commission. So you need to be an expert in public international law and be nominated by the government of your state. Then you need to get the necessary votes in the election. There are, of course, usually several candidates for the position. Their campaign is supported by the Ministry of Foreign Affairs and, especially, the Permanent Mission of the Czech Republic to the United Nations in New York, where the election takes place. Obviously, the candidates need to make a lot of effort themselves to be elected.

What are the burning issues in international law today?

There are many burning questions in international law today. But these are not necessarily those that the International Law Commission may deal with. It is not possible to start discussing whatever comes to mind or the most pressing issues at the moment. The Commission has its Statute and an approved agenda. It is a subsidiary organ of the UN General Assembly that must abide by clearly set rules. There are selected approved topics that are suitable for codification and development of international law. Our work in specific areas takes years, so the issues we look into may not necessarily be those currently being discussed in the media or by experts in the field.

This year’s session included the final reading of draft articles on the prevention and punishment of crimes against humanity, which might – ideally – form the basis for drafting a convention on this topic. It is up to the General Assembly of the UN to decide if and when these articles become a convention. For example, we are also currently considering, in the first reading, the principles to govern the protection of the environment in relation to armed conflicts.

How has the teaching of public international law at your department changed over the years? What are students interested in the most?

Public international law has always been of interest only to a certain group of students. Most of them see themselves working in civil, criminal, or financial law but then there are these few students who find international law interesting. Public International Law is a compulsory subject completed by an exam for all students. Every lawyer should be acquainted with the basic principles of international law because you may come across these issues regardless of your speciality. Students who want to gain more in-depth knowledge can choose from a number of elective subjects. Some want to learn about international protection of human rights, humanitarian law, or international criminal law. Others are more interested in international economic law, protection of investments, arbitration, etc.

What do you like the most about international law?

I have been attracted to this branch of law since my studies. I like the fact that it has always been different from national law, whether Czechoslovak law in the 1980s or today’s legal system, which must accommodate constant changes. Surprisingly, international law is a bit more stable in this respect. It also evolves over time but at a much slower pace and changes must always be approved by at least two different states, while general rules must be approved by all or a significant number of countries.

It is an area that requires a lot of time. You need to follow current affairs abroad and obviously travel a lot and participate in international conferences. Perhaps this is why I first developed a liking for this area. It is more demanding but also more varied, so burn-out is less likely even after all these years. International law offers many interesting opportunities, especially when you face a challenge such as membership in a UN Commission or other international bodies.

Final question: how do you relax after all those exhausting professional activities?

I try to read books that are not related to my work. However, I have to admit I used to have more time for that when I was younger. I like going to the theatre and concerts. I go skiing in the Alps in winter and I also like hiking. Besides that, I enjoy the occasional wine tasting with my friends. I always try to make time for these activities because I do have a lot of work and it is necessary to take your mind off things from time to time.