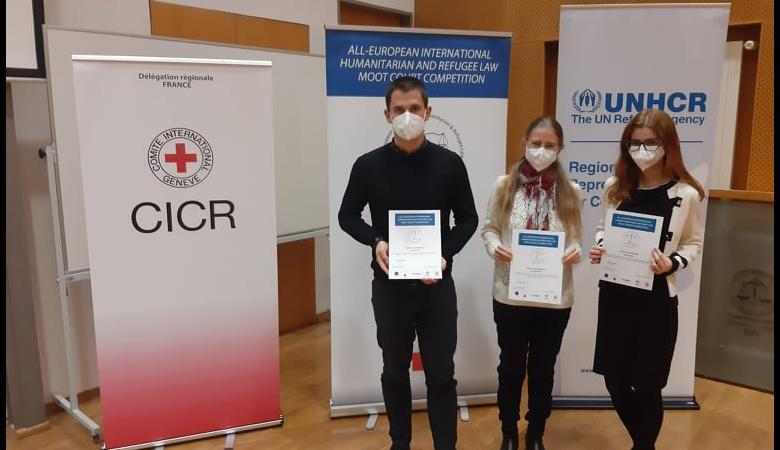 A team of students from the Charles University Faculty of Law took part in the All-European Moot Court in International Humanitarian and Refugee Law for the first time this year. The event has been organised by the Faculty of Law of the University of Ljubljana since 2016 in collaboration with the International Committee of the Red Cross (ICRC) and the United Nations High Commissioner for Refugees (UNHCR).

The Faculty of Law of Charles University has a long tradition of participating at various international competitions, including the Philip C. Jessup International Law Moot Court Competition, Willem C. Vis International Commercial Arbitration Moot, or the Nelson Mandela World Human Rights Moot Court Competition. This year, we can add the All-European Moot Court in International Humanitarian and Refugee Law to the list, which, as the name suggests, deals primarily with humanitarian and refugee law.
The faculty team was made up of two 4th year students of the Charles University Faculty of Law, Adéla Kalová and Filip Crnčević, and their coach, doc. Veronika Bílková, from the Department of Public International Law.

Preparation for the competition began in spring 2021, and unlike the competitions mentioned above, it did not involve drafting any written submissions. The team started by refreshing and widening their knowledge of international humanitarian and refugee law. The organisers then sent a case study to the teams, who focused on identifying and resolving the legal problems following from the study.

The case study described developments in the fictional region of Abaha, where an internal armed conflict broke out between the government (Abahia) and rebel forces (Free Army of Abahia). There are two terrorist groups also involved in the conflict (Tabakh and Alkadi). One of them is trying to declare an independent fundamentalist state in the territory of Abahia, while the neighbouring power and a member of the UN Security Council, supports the Free Army of Abahia, and launches attacks against the terrorists’ targets. Convoys of refugees are heading from Abahia into the neighbouring countries. The case study is clearly inspired by the situation in the Middle East (Tabakh and Alkadi evidently represent the Taliban and Al-Qaeda), and the events related to the migration crisis in 2014-2015 (closing down of borders, attempts to discourage refugees, their refoulement to dangerous countries, etc.).

The international – and oral only – round of the competition was organised between 16 to 19 November 2021 in the premises of the Faculty of Law of the University of Ljubljana. Due to the relatively strict Covid restrictions, the number of teams was limited to eight – in addition to the Faculty of Law of Charles University, the law schools of universities in Košice, Katowice, Sofia, Ljubljana, Vilnius, Galatasaray, and Istanbul were represented at the competition.

In those four days, the teams competed in six rounds in total, during which the situation in the region of Abaha evolved further, and with that also the roles played by the individual teams (representatives of the UNHCR, representatives of the countries involved, fighters of the Free Army of Abahia, etc.). This format allowed the judges, experts in international humanitarian, refugee, and also criminal law, and members of the academic staff, as well as representatives of those who practise in this area of law, to test the teams’ knowledge in these branches of international law, and their ability to react flexibly to a dynamically changing situation. In addition to their knowledge, the students’ presentation skills and their ability to assume the individual roles were taken into consideration in the evaluation.

The team from Ljubljana won, but the performances of all teams, including the one from the Faculty of Law of Charles University, were comparable. Given this fact and that we now have a better picture of what the competition looks like and what is expected of the participants, teams from our faculty have a good starting position for future participation in this competition – in which we can not only participate but have a good chance of ranking high.